The Santa Maria Valley Chamber’s Military Affairs Committee helps the organization maintain an active relationship with the command structure at Vandenberg Space Force Base, providing sponsorship for airmen and employee recognition programs, facilitating interaction with local community and base leadership, and in general acting as a connector between the base and town. Additionally, the Chamber supports many veterans-related programs and organizations and annually hosts a program at the local Freedom Monument (originally built by the Chamber) to honor those with connections to the community who gave all in our defense.

The Military Affairs committee is welcoming in new leadership, and is thankful for the leadership and dedication outgoing Chairman Bob Hatch has shown to the committee over the years. Hatch, who formally served as the President & CEO of the Santa Maria Valley Chamber, assumed the role of Chairman of the Military Affairs Committee after his retirement. His military background and connection with Vandenberg Space Force Base as the Honorary Commander of the then 30th Space Wing made him a huge asset in this role.

As committee chair, Hatch enhanced the Quarterly Awards and Space Launch Delta 30 awards programs at Vandenberg Space Force Base. Winners in the respective categories now receive many gift cards and gift baskets either donated or purchased by community members. They are presented at the luncheon organized by the base to recognize each service members accomplishments.

“I felt the communities should be doing much more to show appreciation for the hard work and dedication to those who are defending the freedoms they enjoy,” Hatch said.

Hatch also served as a direct liaison for the Chamber to Vandenberg Space Force leadership, and was actively involved in a myriad of base programs, and regularly attended base function to further demonstrate support.

Hatch is now passing the torch to Jim Bray and Andrew Hackleman, who will serve as the new co-chairs of the Military Affairs committee.

“I will be eternally thankful for the honor of serving as both the chairman of the MAC and the Honorary Commander of Space Launch Delta 30,” Hatch said. “I am excited to pass the Military Affairs Chairman role on to these two qualified individuals. Both are retired military officers and are poised to assume the duties. By understanding activeduty life, they both have fully embraced this program.”

Andrew Hackleman is the Assistance City Manager for the City of Santa Maria. He is a retired Air Force Lieutenant Colonel, and served in the U.S. Air Force from 1996 to 2017.

“The committee is important because the community plays a key role in supporting the base and its people,” Hackleman said. “The base relies on the surrounding community for many things, like health care, shopping and housing.”

Hackleman looks forward to continuing to build and strengthen community relationships with the base during his role as co-chair of the Military Affairs Committee. “It’s a great opportunity to include more Chamber leaders and get them involved,” he said. “I look forward to serving in this role.”

Jim Bray will serve alongside Hackleman as the second co-char of the Military Affairs Committee. He is a retired Public & Government Relations manager in the oil and gas industry. Bray served two years’ active duty in the U.S. Army, and retired with 28 years combined active/reserve service. In addition to serving as co-Chairman of the Military Affairs community, Bray currently serves on the Allan Hancock College Foundation board, president of the PCPA Foundation board, is an advisory board member of the California Oil Museum, and an Honorary Commander at Vandenberg Space Force Base.

“Supporting our military is one of the most vital things a local community can do,” Bray said. “With Vandenberg Space Force Base on the Central Coast, we have a tremendous opportunity here locally to not only support that organization, but the men and women who are a critical part of Team Vandenberg.”

Bray as that in his leadership role on the Military Affairs Committee, he hopes to continue to stay in touch with today's active duty military, and find opportunities for the Chamber and local community to best

“We are extremely fortunate to have a premier U.S. military base in our community,” Bray said. “And with that, we are offered an excellent opportunity, and responsibility, to support and assist that organization and its service members.”

The Chamber would like to thank Bob Hatch for his years of leadership and commitment in building the Military Affairs Committee, and are excited to welcome Andrew Hackleman and Jim Bray to serve this important leadership role.

“Santa Maria is proud of our relationship both with Vandenberg Air Force Base and with the large population of veterans who live and work in our community. We recognize the significant economic impact that they bring to our community, along with the value they provide as neighbors, friends, and colleagues,” said Glenn Morris, President/CEO for the Santa Maria Valley Chamber. “We are grateful for Bob Hatch’s work in building a solid foundation for our Military Affairs Committee, and look forward to the working with Hackleman and Bray on continuing to build and maintain a strong relationship with Vandenberg Space Force Base.”

Additional information on the Santa Maria Valley Chamber committees and how you can get involved is available at santamaria.com/ChamberCommittees. 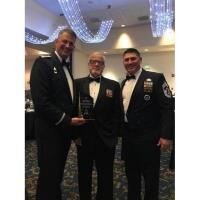